Those who are experiencing sore gums may be guilty of not following this tip. Like all habits, they tend to be repeated over and over again. One brushing habit that many have developed is starting in the same place. In the end, this causes one area of the mouth, gums or teeth to receive more attention than other spots. This results in excessive tooth and gum wear. A recommendation for your teeth

It is recommended to start in a different place each time. The easiest and most effective way to do this is to start in an unlikely spot. For instance, one who normally starts on the right side of their mouth out of habit should switch to their left side. As a side note, the orthodontist also recommends brushing in circular motions, rather than saw-like ones.

Also, this bad habit may cause excessive bacteria to build up in areas that don’t receive as much attention, leading to other problems on their own. One of the best pieces of advice that he gives is to count while brushing to make sure each area gets equal attention. For example, brush the lower left, lower right, upper left and upper right side for a good 20 seconds each.

This tip becomes even more important to follow for those who wear Invisalign. Not only can they damage their teeth and gums, but they can permanently damage their Invisalign as well. If one follows this simple tip and applies it continuously, they will be able to look forward to healthy gums and teeth that are beautiful all around. A periodical visit to the orthodontist is necessary for having clean, healthy teeth, so call and make an appointment with Dr. Joel Gluck today. 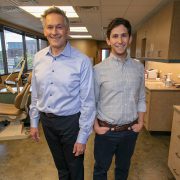 Smile. It Increases Your Face Value Are Braces Cheaper Than Invisalign?